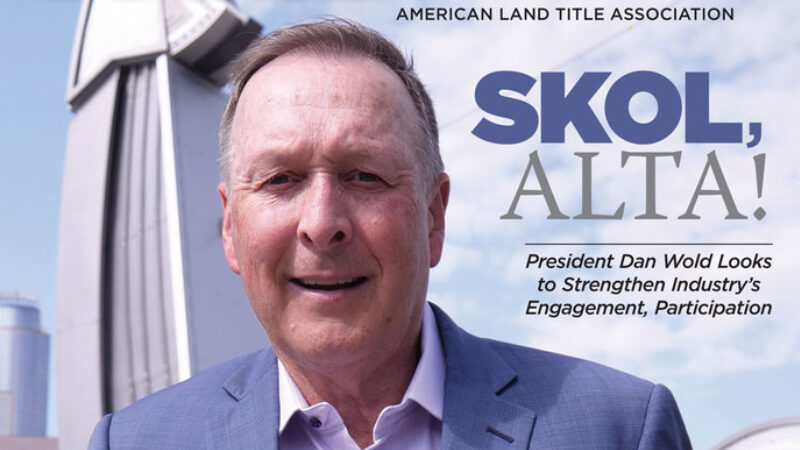 RADITIONS BRING A SENSE OF SECURITY. Certain practices and events can help create unity. They keep us connected to the past, build memories of the present and pave the way to new traditions. Deeply rooted to his Scandinavian heritage, Dan Wold holds in high regard the importance of family, community and faith.

As ALTA president for the next year, Wold hopes to utilize his nearly four decades of experience to help guide the industry through current and anticipated challenges and increase engagement through advocacy—all while sprinkling in some of his well-known, special brand of Scandinavian humor.

“The ALTA presidency provides me the opportunity to collaborate with thousands of dedicated title insurance industry professionals who truly work hard to lead, deliver for and protect their customers and communities,” said Wold, executive vice president of industry relations and strategic initiatives for Old Republic National Title Insurance Co. “It’s an honor to represent the ALTA membership, and I look forward to collaborating with ALTA’s Board of Governors, staff and membership on the association’s new strategic priorities. I am optimistic about what we will accomplish over the next year. I am confident we have laid the foundation for continued success in the future.”

ALTA CEO Diane Tomb said Wold’s legal insight, strategy experience and ability to collaborate with policymakers and industry stakeholders will be invaluable as the country emerges from the ongoing pandemic.

“Dan’s ability to help lead partnerships across the real estate, title and lending industries on key marketplace developments will be key, especially where standards are needed for the smooth continuation of business,” Tomb said.

Through the fifth grade, Wold lived in Kenyon, Minn.—a farming town of about 2,000 an hour south of the Twin Cities. He described the time as idyllic when “we were able to ride our bikes all over town.”

“This was a time when the local kids organized activities like pick-up baseball games without much adult involvement. During the summer, we’d be outside most of the time and head home for meals,” said Wold, who is the middle child of five. “The community swimming pool was a focal point for kids on hot days since it was an easy biking destination.”

His family moved to Rochester when he got to junior high. Both of his parents were teachers. His father coached the boys’ high school basketball team. His mom was an artist. In high school, Wold played basketball and competed in the high jump on the track team.

Wold said that while family and community were important, his parents led by example rather than dictating expectations. During his youth, Wold recalled visiting the small town in Minnesota where his father grew up to watch the July 4th parade—full of the traditional participants including community fire trucks, Shriner go-cart and motorcycle drill teams, farm machinery and politicians. During the late 1980s and early 1990s, the Shriners toured the country. “It was a true slice of Americana,” Wold said.

Each October, the family would make the annual trek back to the Blooming Prairie First Lutheran lutefisk supper. Lutefisk is dried cod that has been soaked in a lye solution for several days. It is rinsed with cold water to remove the lye. Then, it’s boiled or baked, and served with butter, salt and pepper. Norwegian-Americans traditionally serve it for Thanksgiving and Christmas. Lutefisk tends to be a food that people either love or hate. “Once a year is probably enough,” some have said.

The meal also included meatballs, mashed potatoes, corn, lefse (Norwegian flatbread) and an assortment of traditional Norwegian Christmas cookies. “My dad used to tell me that if you had lutefisk in the fall, you didn’t need a flu shot.”

And when you toast with a beverage, the saying is ‘Skol,’ “which has been commandeered by the Minnesota Vikings, don’t cha know,” Wold said.

Wold’s career aspirations ranged from park ranger (he always enjoyed the outdoors) to astronaut (he remembers watching the July 20, 1969, moon landing while in high school) to college professor. He settled on philosophy and graduated in 1976 with a bachelor’s degree from the St. Olaf College, a liberal arts institution founded in 1874 by Norwegian Lutheran immigrants. While there, he played basketball for two years and ran track all four years. At the time, he set the school’s high jump record.

After graduating, Wold worked a range of blue-collar jobs, traveled and lived primarily in Montana and Idaho, “Then I decided it was time to get an advanced degree and so I decided to attend law school.”

With a law degree from the University of Minnesota Law School, Wold was recruited by Hughes, Thorsness, Gantz, Powell and Brundin, a large firm in Anchorage, Alaska.

“I had excellent mentors who were great lawyers,” he said.

As a commercial attorney, Wold’s principal areas of practice included real estate, bankruptcy, banking and general business law. Even though he became partner he elected to return to his Midwestern roots in 1991.

Back in Minnesota he initially practiced in the areas of real estate and bankruptcy for The Resolution Trust Corporation and a local law firm. In 1993, he landed a job in the corporate legal department with Old Republic Title.