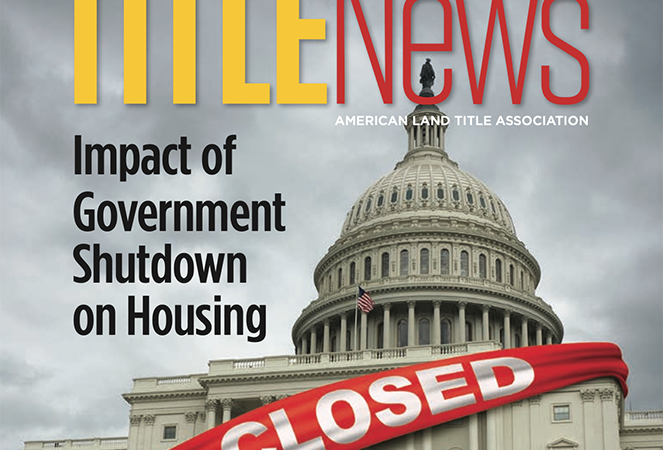 Impact of Government Shutdown on Housing

Closings Delayed, Canceled Due to Funding or Income Verification

THE EFFECTS OF THE PARTIAL FEDERAL GOVERNMENT SHUTDOWN on the housing market were wide-ranging. From unpaid workers who must make their mortgage or rent payments to aspiring homebuyers who may see their loans in limbo, the longest government shutdown impacted the mortgage and real estate industry.

Due to a dispute over border wall funding, President Trump and congressional leaders failed to reach a budget agreement and roughly one- quarter of the government was forced to close on Dec. 22, 2018. On Jan. 25, President Donald Trump and congressional leaders agreed to fund the federal government until Feb. 15. The move ended the longest shutdown in American history.

While the government has said tax refunds will go out despite the continued shutdown, it’s been reported that only about 12 percent of IRS employees were still on the job at the time. This caused a backlog of calls to IRS offices as phone lines were converted to voicemails. In addition,
it appeared the IRS shutdown plan limited the amount of time that collection staff spends on the phones or responds to correspondence.

Bill Burding NTP, executive vice president and general counsel for Orange Coast Title Co., described this as a “big problem” for the industry as deals were either delayed or canceled.

“There is no workaround to the delays or cancellations in my mind, and I have said no to proposed ones,” he added. Nick Hacker, president/ and CEO of North Dakota Guaranty & Title, said one underwriter his company works with had advised against closing deals involving IRS liens. The company held some seller proceeds until the payoffs are confirmed in order to continue closing transactions.

In a Jan. 7 bulletin to participants of its Income Verification Express Service (IVES), the IRS said it has started working through the backlog of requests for transcript information.

“While the IRS remains closed during the partial government shutdown, on January 7, 2019, it will begin processing requests for transcript information made through the Income Verification Express Service program,” the bulletin said. “Because it will take time to ramp this service up to normal operating status, it may initially take a few days to process these requests, as employees are brought back to work and begin to process requests backlogged since the funding lapse began on December 22, 2018.”

For information on which IRS collection advisory office to contact with questions about notices of federal tax liens or certificates, go to irs.gov/pub/irs-pdf/p4235.pdf.

According to a survey of more than 2,200 members from the National Association of Realtors, 75 percent reported no impact to contract signings or closings. However, 22 percent did report an impact on either current or potential clients.

Among those impacted by the shutdown, 17 percent reported delays related to closings on USDA loans, 13 percent cited a delay due to IRS income verification, 9 percent had a delay due to FHA loans, 6 percent saw a delay due to a VA loan and 9 percent did not cite the reason for the delay.